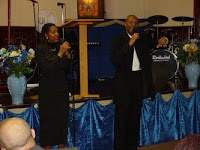 We have so much exciting news that I hardly know where to begin.

We are glad to return from our most recent expedition to Harrisburg, PA. On our way, we played the audio recordings of the prophetic words over our family. We played the specific words given to our sons so that they could be reminded of God’s promises concerning them. Then we played the words given to us so they could hear the connection. We prayed together and continued on our journey.

After checking into our hotel, we went to see Carol’s mother. Her youngest brother Michael and his wife are staying with her right now while they are working and saving money. This was our first chance to meet Carol’s sister in law, Rosalind. She got saved and delivered out of a life of drugs. She still had to serve time in prison for drug possession and she just got out earlier this year. She is on fire for God!

Later in that evening Carol’s other brother, Chris, came over. He was really glad to see his nephews and sat on the floor talking about family and the need for everybody to get together. He eyes begin to fill up with tears as he talked about it. He had been drinking and I couldn’t tell if it was the alcohol or genuine emotions at first. Either way, we knew God was really convicting his heart.

After a whole lot of talking, joking, laughing and random conversation, Carol’s mom stood up to send us all out and get ready for the next day (Thanksgiving Day). She said she would start the prayer and asked me to close.

Well when I prayed I felt led to pray for mom first. God gave me a word that everything that He had promised her would come to pass. She would not die without seeing every promise fulfilled.

She began to jump up and down thanking God. We were all caught by surprise. You see mom does not show this much emotion. Then the Lord directed me to pray for Carol’s brother, Chris. As I prayed for him, I went over and laid my hands on him and God gave me words concerning his life, his purpose, and what it would take for him to get past the pain. I told him it was time to surrender his life to Jesus. I led him in a prayer of repentance and acceptance of Jesus into his heart and life. When I opened my eyes, tears were streaming down his face. We all embraced him and his little brother welcomed him into the family of God. Michael ran upstairs to get a Bible for his big brother. Mom was so happy she didn’t know what to do with her self. She and Carol were almost in shock because what they had been praying and asking God to do for over 30 years had finally happened right before their very eyes. Chris had lots of questions. Carol assured him that it would take time, but he was going to be okay. We will be adding Chris Dennis to the Intercessory prayer list.

So the very first thing to happen on our first official time of ministering in Harrisburg Pennsylvania was that Carol’s brother got saved. God has truly confirmed the call to that city. As Pastor Ray has already taught us, you must start with family. It’s got to work in your own family before you try to take it to the world! We look forward to going back to be a part of discipling Carol’s brother. The best part was that this all happened right before our children. Dad and Mom’s ministry became very real that night. Carol told me that her mother didn’t make it to the hospital and her brother was born in that house. I told her, "Tonight he was born again in that very same house."

Through my college room-mate’s connections in the city of Harrisburg, we have access to the entire Harrisburg school district to get into elementary, middle, and the high schools. There’s still so much more to tell. We met with Bishop Paul Veney and we talked for over five hours. He’s preparing to move to North Carolina next year and he believes that somehow I am to take over for him in his gate-keeping role in that city. We don’t know what all of that will mean. He wanted to make sure his people would be in capable hands. Again he said, "I don’t know how all that can be worked out. "Let’s just see what God has to say." He also owns about 4 houses throughout the city that he needs to sell. I think we are being set up in every way possible. Again we’re all just saying, "Let’s just see what God has to say."

He told me that every time we come to Harrisburg, he wants to know so we can minister in the community and to his church. He wants us to show them how to do a "Community Care Day" type of outreach. His daughter wants to do Urban Music Fest type of outreach. "Let’s just see what God has to say."

On Sunday, November 30, we ministered in Bishop Veney’s church. It was a very small congregation that dwindled due to a major blow against their church. They had raised over $300,00.00 to buy a church building. The company they trusted to handle it for them, skipped town with their money. The church was devastated and many people left.

The Lord told me to minister from the subject, "Time to Heal and Time to Deal" He gave me a word for them that I was like the prophet Samuel sent to anoint the next king of Israel. They were faithful sons just tending their father’s sheep. They were forgotten and cast aside, but God knows who they are and where they are. God moved in a very tender and gentle way. Again we ministered to several individuals prophetically. There were lots of tears and even wailing. One was Carol’s mother who really broke down. Carol’s brother Michael said he had never seen that happen to mom ever. At the end of the service, Bishop Veney said this (Prophetic Ministry) has been the missing element in the Body of Christ in Harrisburg. We were deeply impacted by that statement.

Carol’s mother was completely changed. She was embracing us, talking and laughing. She asked us to come by her house after service. When we did get there, we watched her Michael & Rosiland’s wedding video, which was very important. It was another connection. Since we weren’t there when they got married, now they know that we care and their marriage matters to us.

Finally mom told us that she is glad that she finally got to see our ministry. She didn’t know her daughter was a singer and a minister. (We sang Totally Because of You). She was pleased with the ministry style and she can now even receive rap after I explained the purpose and demonstrated its use. (I did At Your Feet/ Revelation 4).

So we’ve returned and were right back to our video classes and preparation. We can sum up this trip with this phrase: "Let’s just see what God has to say."