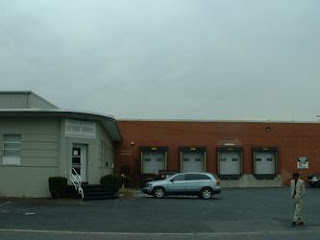 We came to Harrisburg to minister to Bishop Veney’s congregation in his absence, meet the Nigerian pastor that I mentioned in last month’s report, look for a house, and make our appointment with Milton Hershey School for a job interview. God had His own plans in mind.

Carol and I met with a real estate agent on Saturday morning at 10:30am. She drove us around the area that we have in our heart for the school district that we desire the twins to be in. She gave us the paper work for the houses and told us we would be looking at four new construction developments. She asked us about ourselves and we told her that we were pastors relocating and planning to start a church in Harrisburg. Suddenly she said, "I just received a listing for some property that you might be interested in. It’s a television station and seems like that could be used as a great evangelistic and outreach for a church. We can stop by my office and I can give you the paperwork on it."

Carol and I just looked at one another. All I could think was, "O’ my God, You have got to be kidding me! Lord, you can’t really mean what I think is going on right now!" Then I thought what Bishop Veney keeps saying , "Let’s just see what God does." We went on to look at the four homes and then she took us to her office where she gave us all the paperwork including the floor plans of the station saying, "You take them because I can’t do anything with them." The last time we received floor plans before we purchased the property was at 3452 Potomac St in St. Louis, Mo. She gave us print outs of other buildings and churches, but I was still in a daze of having this whole situation switch from searching for a house to looking at floor plans for a television station. Saturday night. Pastor Ray called us. He said the Lord spoke to me in my prayer time and told me to tell you that the second offer that you received, I’m in it!"

Finally that Saturday evening, Carol and I sat down to complete our job applications and paperwork for the interview at Milton Hershey School. There was simply no peace at all about it. I looked at Carol and said, "We can’t do it." She just shook her head. "I’m looking for security, but we’re not sent here to work jobs. We’re here for the purpose of God. We have to trust Him all the way." We put the applications back in the luggage. We just couldn’t do it. We know that we can never violate the peace of God. We have always regretted every time we did that.

Now hold on to your seats. This is where it gets good!!!

We went to visit the church of the Nigerian Pastor (Crusaders Christian Center). His congregation meets in a warehouse. They leased some of the space and converted it into a sanctuary, a fellowship hall, a kitchen and some storage. His name is Michael Odowgue (pronounced Oh dah who). We sat in a well lit room that seats about 50-75. It was carpeted with a small platform, some decorations and was very neat and clean. They were setting up for the 10:00am service when we arrived.

Carol and I were taken to his office where we met his wife. She was white. We later found out that he lived in England for six years and did not want to come to America. God told him to go and he came to Harrisburg where he met Bishop Paul Veney. He served in Bishop Veney’s church for 3 years as a greeter/usher. Bishop Veney released him into his own ministry four years ago.

He found this warehouse and leased some of the space. They worked on it and transformed it into a church. I sat there listening and thinking that we would probably follow the same kind of pattern and that God was using this pastor to confirm our path. He asked us about ourselves. We told him that we had met Bishop Veney through his daughter Lisa. We told him how we had been coming to Harrisburg to minister to Bishop Veney’s congregation and that Bishop wanted the two of us to meet someday because we were moving to Harrisburg to plant a church.

Suddenly Pastor Odowgue got very excited. He said, "Just last week I closed on a transaction to purchase a building for our congregation. Since we are about to vacate this property, my wife and I was just praying and asking God to send another church to take this warehouse space. We did not want it to be turned back over into some other use. We wanted a church to be here after we leave." Carol and I looked at each other. We had just walked into the doors of a pastor who just bought another building and he was praying for God to send another church to take the place they were occupying. It does not get any plainer than that.

"Since you are going to be looking for a place," he continued "let’s just pray about this and see if this is where God would have you." I calmly and casually agreed, but inside I was exploding. "God you are so awesome! You’ve done it again!"

But wait, the story doesn’t end.
Pastor Odowgue went on to say, "The property that we are purchasing is the building that Bishop lost last year. It’s the building in which I once served the man of God. I used to be a greeter there. I received my training there. When Bishop lost that building the devil thought he had won. One day I heard that some business men were going to buy that building and tear it down to make a parking lot, but I said the devil is a liar. That property belongs to the kingdom of God. We paid cash and bought that building back for the kingdom of God. When we hold our first service, I have already told Bishop that he is to preach the first service to prove to the devil that he did not win."
I cannot put into words how incredible this whole thing is. We’ve been coming to Harrisburg to minister to a congregation that lost its building and many of its members. One of the sons of that ministry has now redeemed that property . God has sovereignly and powerfully worked it all to His glory.

In the meantime, we have converted warehouse space that will be made available to us in 2 weeks.

In this endeavor, we are putting the church building and preparation of the House of the Lord, first. We are pursuing the building before taking care of our personal needs for housing and security. Pray for grace in taking such a stand. It feels crazy to do it this way, but the peace of God is present.

After the 10:00am service with Crusaders Christian Center, we rushed over to meet with the Greater Heights congregation. God gave us a powerful move and a simple word. "Resurrection Day has come. Why seek the living among the dead?" The congregation erupted into praise. I mean old school shouting and dancing. I did not expect such a move, but God knew what He was doing.

Now, to the Intercessors for Fruitful Life
, please pray as we negotiate with the landlord, that we will have favor so that the enemy cannot change his mind to keep another church from moving in. I spoke to Pastor Michael Odowgue Tuesday morning and he will have the warehouse landlord call us directly.
Pray for favor in negotiating the lease. Pastor Ray wants us to consider an outright purchase, so we need wisdom for what to do and how to proceed.

Please review the prayer site because the other team members have been instructed to place their prayer request on the site also.

God bless you all and thank you really praying for us. We know that this GOOD report is directly connected to the intercession that has gone up on our behalf