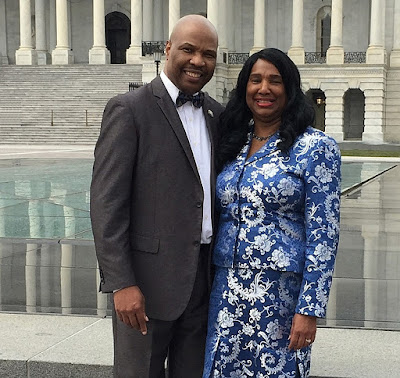 Washington, DC (Capitol Hill) ---Community Life Coaches, Chris and Carol Green were part of a special Honors and Distinctions Ceremony held in Washington, DC in the chapel of the U.S. Capitol Building.

In this year's event, the Greens received their second honorary doctorate degree in as many years. This time it was the Latin University of Theology conferring upon them, honorary doctorates in Society and Human Rights to acknowledge their 30 years of ministry and service in the urban community.

"We are humbled by this honor and very grateful," the Greens responded afterwards. "We don't know how we came to be included with such an elite list of highly esteemed people. You never know how far your calling and passion will take you. From our perspective, two kids from the 'hood' were honored on Capitol Hill."

Hosted by iChange Nations™ and Dr. Clyde Rivers, this non-political event featured several honorees from across the United States and from Africa. The list of honorees included:

* Dr. Ruth Mizell, is a former campaign manager for President George Bush Sr., who also served under President Ronald Reagan and President George H. W. Bush as adviser to the U.S. Peace Corps. During those years, she served as liaison to the White House for the American Christian Trust, served on the Board of Directors of the National Prayer Embassy, and was active in several Christian ministries. In 1994 she became active in Capitol Hill Prayer Partners and became their liaison to the Capitol.

* The Honorable Simona Broomes, serves as the Minister of Natural Resources for the Republic of Guyana, Africa; recognized for her work to stop human trafficking.

* Natasha Stewart, MS-LPC, currently serves as the director for The Center for Counseling and Behavioral Health at The Potter's House of Dallas, under the leadership of Bishop T.D. Jakes.

* Chaplain Allen Perry, is a powerful motivational speaker, who is a certified Chaplain with the National & International Chaplain’s Association through Florida Theological Chaplain Academy.

"This couple is effectively changing lives in south central Pennsylvania!" stated Dr. Rivers as the presenter of their latest degrees. "They are making a true impact and creating a new narrative in the arena of Life Coaching. We decided to bring them to Capitol Hill for this recognition because we believe they are the best of the best in what they do. They are on the front lines of a completely new way to serve communities and equip leaders in human services."

Since 2004, the Greens have been able to establish a network of community leadership-supporting services that have been essential to their work with the unemployed, the homeless, to human service advocates, educators, pastors, and all who are seeking to inspire a higher and greater purpose for living.

They served in local church pastoral leadership in Saint Louis, MO and Harrisburg, PA for a combined 27 years, before launching out full-time to encourage, support and strengthen leaders from all spheres and aspects of life. They are:
Chris and Carol Green are Life & Healing Communicators: authors, speakers, teachers, community life coaches, leadership consultants, ordained ministers, songwriters, poets, intentional listeners, and students of life and the Bible. They are also traditional marriage & family advisers and human rights advocates. They are a husband-wife team, in the south central Pennsylvania region, who are resigned to a calling to rebuild, restore and renew hearts and homes.

Two years ago, in 2016, the Greens were honored in Washington, DC when they were publicly confirmed and acknowledged, receiving Honorary Doctorate Degrees in Christian Leadership (Chris) and Humanities (Carol), which were officially conferred upon them by the chief chancellor of the United Graduate College and Seminary International (UGCSI). These were honorary ministry degrees that were granted in acknowledgment of 11+ years of building and implementing a new urban outreach model that combined Participatory Teaching methods with evidence-based principles of Life Coaching, to produce an effective, quantifiably successful, and family-impacting ministry in south central Pennsylvania.

The 2016 public acknowledgment took place during a special evening of honor by iChange Nations™ on April 23rd in Washington, DC. Since its beginning, iChange Nations™ has recognized Distinguished Leaders as well as those who are part of their International Alumni, who are effectively changing their community and nations through their efforts.

For their community life coaching service, the Greens received a United Way 2017 Volunteer of the Year Nomination. They also received Urban Leadership Awards (2016) and Community Ambassador Awards (2015) from iChange Nations™, and Goodwill Ambassadors of World Peace Awards (2015), as part of an interfaith peace-building initiative to the United Nations, by Golden Rule International.

Chris Green is a social media veteran and an award-winning producer of a local cable television broadcast (1999). He is the producer of 1100+ online videos and 200+ audio podcast, creator of 15 social media brands, and designer of several organization and business websites.

Together, they have been international columnists/ writers with a Global Journalism Award-winning social media news team, the authors of 14 inspirational life-building books, and the creators of several blogs and eNewsletters. They are also accomplished songwriters, having penned and produced over 150 songs since 1992.

Chris and Carol Green are not affiliated with any political party, religious dogma, or 'bandwagon' social movements. They have been under-the-radar leaders in a national phenomenon in which people of faith have been moving, by the thousands, out of their traditions and buildings to take Christ's healing and hope to their families and neighborhoods.