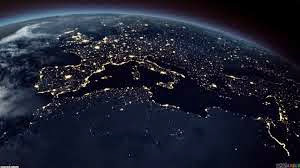 The Lord gave me a life-altering experience over ten years ago. It was about three weeks after the 2010 earthquake in Haiti. You may recall that the 7.0 magnitude quake that rocked Haiti on Jan 12, 2010 was the biggest urban disaster in modern history.  More than 200,000 people were killed, and another 1.5 million were left homeless.

I was lying awake after a restless night of constantly seeing the TV images of Haiti running through my mind. I'm always deeply affected by various events going on around the world, so I began to pray in the spirit and instantly fell into a kind of sleep, but I wasn’t asleep.

I felt a powerful wind come upon me and I was taken up and carried way above the Earth. Then from what seemed to be a satellite view of the Earth, my vision was focused upon the North American continent.

I was carried down out of space and another great wind came and carried me through city streets. At a speed, faster than sound or light, I was being carried from one city to another. The wind was carrying me through the streets, around buildings and through neighborhoods.

I had a simple question, "Lord, what do you want me to do?"

Suddenly the wind carried me high into the sky and I was rocketed towards the Midwest. I realized I was flying toward St. Louis. As I was descending, I saw the stadium, but I did not quite reach the city. I stopped before I reached the boundary of the state line.

I asked the Lord, “Where do you want me to go?”

Suddenly, I was being pulled backwards. I thought: “Am I going back to Harrisburg, going to Philadelphia or New York?” But the wind suddenly shot me back up into a satellite type position, high above the Earth again.

I looked straight down and my eye sight, my vision changed to that of a satellite image. It was as if though I were looking down upon a city through the lenses of a camera. I heard the sound of a camera shutter and the image changed to another city; then another city; then another and another. The images begin to change faster and faster until it was moving at rapid-fire speed.  It was far more cities than I could possibly count.

Then the wind carried me back to the Earth and into my body. I lay there still feeling the wind moving upon me, and the Lord said: “I’m going to put YOUR name in the wind… when I do; you are to put MY name in the wind.”  Then I came out of the vision. I had never had this kind of experience in GOD.

I did not reveal this vision to our church family until four years later, on the first Sunday of September in 2014. It was the first time I publicly spoke about it.

Today, I share with you something that has been in my heart for many, many years. Through all of our training and experiences over the past 40 years, we have been prepared and groomed for a very specific latter-day ministry. And that ministry is starting to come alive. Could it be that it is coming forth with the advent of live-streaming through the internet? Could that be how I would be in many cities all at the same time, in a flash of time; many places at once in mere seconds?

For the past 16 years in Pennsylvania, I have always told my wife that I have not seen just a church or a church building for our ministry. I ALWAYS SAW MORE. That vision happened to me 10 years ago, and I have waited to see what it could possibly mean.

He has connected us with other like-minded leaders, from around the world, who do a lot more than just TALK, but they are people of ACTION, like us. They do not procrastinate and they do not take months and years to finally decide to make the necessary steps to obey the voice of God. They are not allowing the precious time they have left on this Earth to be wasted with the petty pursuits of power through politics, religion, money, and fame.

We are sensing that the revelation of that vision and the next part of our journey has come upon us. Nearly 40 years ago, we sensed God’s timing to move from Tulsa to St. Louis to work and serve with my brother. After serving in our home church for 17 years, the Holy Spirit spoke to us about moving to South Central Pennsylvania. Now after 16 years in Pennsylvania, we sense the Lord connecting us to global opportunities, with others who have the same call to turn hearts, communities, cities, states, provinces, nations, and our world to Christ.

I still recall how, in January of 2014, the Lord spoke to us through His word where He said:

"And to the angel of the church in Philadelphia write, ‘These things says He who is holy, He who is true, “He who has the key of David, He who opens and no one shuts, and shuts and no one opens. I know your works. See, I have set before you an open door, and no one can shut it; for you have a little strength, have kept My word, and have not denied My name.”

It is becoming more and more evident that a new season is upon us and very significant doors are being opened for Carol and me; and for those who have joined to us, who are willing to answer the call, too.
We don't know what the remainder of 2020 holds in store for us. After the presidential election, we'll be facing unimaginable challenges, trials and sorrows that will require God's grace, favor, protection and wisdom to navigate through.
We invite you to see MORE with us, to receive MORE, and allow the Holy Spirit to send you out to reach MORE than ever before.

We are overcomers, moving in a new season,
Pastor Chris Green
Posted at 11:00:00 AM